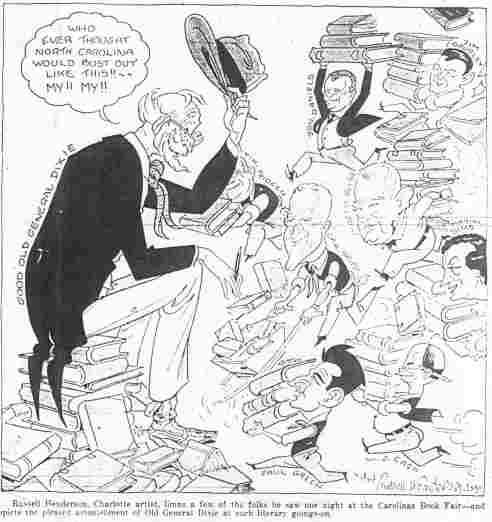 Site ed. note: The Book Fair to which Cash makes reference, the brain-child of Cameron Shipp, was where Cash met his wife-to-be, Mary Bagley Ross Northrup. Mary, high-spirited and bright, wrote book reviews for the News, also, and was an aspiring short-story writer and novelist. Shipp, Mary's cousin, introduced them, and they hit it off immediately. Her first impression was that Cash was not the stuffy old gentleman she had envisioned when she read his articles and earlier Mercury pieces, but rather a shy, balding, slightly pudgy fellow "with a bad haircut" and a decided twinkle in his eye which Mary took for love at first sight. Her reaction to the meeting was to tell her mother next day that she had just met "a fat country boy" whom she intended to marry. They would wed in the wee hours of Christmas morn, 1940.

Cash would strike up yet another fateful friendship at the Book Fair, that of Jonathan Daniels. It would be the gracious Daniels in the fall of 1940 who would become Cash's principal sponsor for the Guggenhiem Fellowship which would take Cash to Mexico.

On May 15, 1938, Shipp recounted of the intellectually lively Fair: "The most popular book was "Pose Please"in the American Institute of Graphic Arts exhibit... A book of nudes, and such nudes, stark, I mean... Mecklenburg liked it so much we had to assign a special man to watch it day and night lest leaves be torn out..."

PAUL GREEN said the other night at the Book Fair that North Carolina, unlike its neighbors on the north and south, "never did have nothin' "--had no past to speak of, that is--and could therefore turn its eyes without regret wholly on the future. It is obvious that that is true so far as literature goes. Prior to the 1920's the whole South was pathetically bare of writers of any genuine stature. But North Carolina was even barer than the South generally--barer then even Mississippi. It simply had no claim to the possession of a literature save the Rev. Tom Dixon--which is to say, none at all.

But Paul was not speaking only of the literary past, I think. Or rather, he was viewing the literary past merely as an integral part of the whole past of the state. And there, strictly speaking, he was dealing a little in hyperbole. [Which] I think he had a perfectly legitimate right to do in order to bring out the point more clearly: Every writer who is genuinely such and not merely a person addicted to set down words on paper under the most pathetic of delusions, has the right, I believe, to dramatic exaggeration. If that betrays and exasperates ninnies, that is too bad. It is not a valid objection to its use, for of course the writer aims to reach people who are not ninnies.

Nevertheless, I am moved to record (not by way of disputing Paul Green, who knows it very well, but by way simply of calling attention to the fact) that I do not believe it is quite true that North Carolina has no past. It has, in truth, a very decisive past. Merely, it departs very widely from the past of its northern and southern neighbors, and from that of the South at large. We exaggerate the past of the South at large a great deal, to be sure. Despite the efforts of some recent historians, we still see it much in the nostalgic terms which were fashioned in the post-bellum days as a sort of defense-mechanism by an impoverished and put-upon people--a sort of Cloud Cuckoo country floating forever in the shining light behind the smoke of Sumter's guns, and filled with vast white mansions around which whole regiments of black slaves danced and sang in the cotton. It was never really even remotely like that, of course, save a few spots here and there. But the old gentry around Charleston and tidewater Virginia and about New Orleans did live on a pretty grand scale at the opening of the Nineteenth century, and some of them were pretty genuinely aristocrats by that time. And these were assiduously imitated by the new-rich upcountry planters and by the planters of the new country to the West. And it was that imitation which, more than anything else, gave tone to the Old South at large.

The case in North Carolina, however, was different. We had some planters, of course. If, indeed, I were to take seriously all the Tar Heels who have assured me that their grandfathers owned 7,000 acres and 400 slaves, I think North Carolina would have had to be twice as big as Texas to have held them. But such fond mathematics simply mean that North Carolina had its share of nostalgic defense-mechanisms in the years after the Civil War, too. We had relatively few planters. And the great part of the state was inhabited almost exclusively by such people as Allan Tate loves to call yeomen farmers. I do not think they were such compendiums of the virtues of sturdy qualities as he makes them out to be.

They varied enormously, indeed, through the whole scale from shiftless, fiddling Irishmen up to the most straight-laced Presbyterian hymn-singers and the tightest-fisted German peasants. And all of them, I think, were cut to a somewhat different pattern from that which the English term, "yeomen," suggests--a pattern fashioned mainly by the frontier. Yet, by and large, they were a stout, if a narrow and sometimes a cantankerous, people.

Above all, they were a plain people. I am not suggesting that they did not vary a good deal in background. They did. Some of them were heirs to a kind of sketchy middle-class gentility. And some of them were simply crude stuff. You can trace that difference today even down among the croppers and tenants, not all of whom fit wholly into the mould of old Jeeter Lester. Nor am I suggesting either that the imitation of the coastal planters did not penetrate into North Carolina. It did, very clearly and certainly. But it never went so far in shaping the dominant concepts of the people. Before the war and after, North Carolina's philosophy went always and definitely in homespun. And its sons and daughters lived always by standards that had in them first of all the stuff of its red hills and its sand flats. Always they remained at bottom just plain people. And so, indeed, most of them remain today.

I think that past is of capital importance. I agree with Paul Green that it is a better leaping off point to the future than the past of South Carolina or Virginia--or Mississippi. And it is certainly gorgeous stuff for the novelist and the playwright who is able to deal with it directly and as it was and is, rather than through the veil of literary conventions.