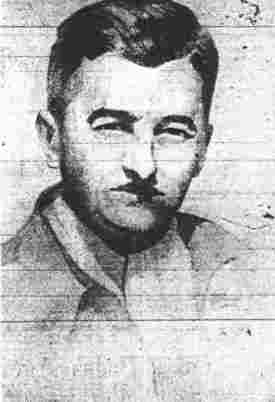 William Faulkner, of Mississippi, in retrospective
gloom, writes in shadows and thunder of violence
and nobility in the Old South. His new book is,
"Absalom, Absalom"[sic].

(As appeared in The News a week before this article.)

Site ed. note: Mainly supreme kudos to Faulkner from Cash. But it is interesting to note that one of Cash's principal criticisms of Faulkner is one of which Cash has been accused by his own critics--that of stating matters with excessive feathers, using two words where one will do. Is critic just victim of critic? You have ample evidence of the case set forth herein to determine one way or the other. As for Faulkner, read The Sound and the Fury to assess Cash's critique. Perhaps the case is true that ample doses of the old Southern rhetoric is present in both--and perhaps gives the writing of each its authenticity as that style ycleped "Southern".

For another Cash article from a few months earlier, dealing primarily with Faulkner, see "An Epithet: Oh, So Sad" - April 5, 1936.

WHEN Arnold Bennett reported that William Faulkner of Mississippi wrote like an angel, he probably exaggerated a bit. There are some excessively squeamish people, indeed, who profess to think that he writes much more like a devil. And, though we need not take the opinions of excessively squeamish people with any seriousness, there can be no doubt that, to play on words a little, there are times when his writings read like the devil. Occasionally, and too often for comfort, his fiction is intolerably awkward and involved; he's entirely too careless about the use of extended phrases to say what a single word would better say; he sadly overworks certain mannerisms, such as repetition and the use of a dangling adjective or adverb at the end of the sentence; and he is too prone to remember his James Joyce and fall into deliberate obscurity.

And on the side of content, there is even something to be said for the charges the over-squeamish bring against him. For there is no disputing that, like his fellow worker in the Southern field, Caldwell (who is sometimes set down as merely his imitator, though I think without good reason), he often lays on his colors, not with a trowel but a steam shovel--lays them on so heavily, indeed, that many times they pas over the limit of effectiveness into the realm of farce.

But when all this is said, the fact remains that he is the most distinguished master ofprose style of all the younger novelists who are at practice in the South--and the most distinguished master of all Southern novelists save only Cabel. I deliberately rate him above Thomas Wolfe, for two reasons. In the first place, Wolfe's really distinguished writing consists almost entirely of rhapsodies which have no integral relation to his novels--mere interludes thrown in, if not gratuitously, then largely as exhibition pieces, whereas Faulkner's stems straight out of the body of his tale, and make an essential part of it--a much more difficult feat. And in the second place, Faulkner's best writing is of a much more subtle sort than Wolfe's best. Wolfe's towering rhetoric is, in fact, only a step or two removed from the old southern oratory, which is the ground out of which all Southern writing has sprung. Its beauty is primarily the beauty of declamation. But Faulkner's measures (like Cabell's, though in an altogether different fashion) have passed far beyond that; their beauty is the beauty of writing, strictly.

As a novelist in the broad sense, I think Faulkner hardly measures to his writing capacities. Nevertheless, if he is not the Matterhorn of genius, the genius-a-minute boys made him out to be two or three years ago, he remains one of the two or three most important of the new Southern novelists, and, indeed, one of the most important of the younger novelists in all America.

He has written books on themes that were not Southern, but they are of no importance. Down to "Absolom, Absolom!, quilt" (which I have yet to read) his claim to attention rests on "The Sound and the Fury," "As I Lay Dying," and "Sanctuary"--all Southern books, as is "Absolom" for that matter. And in these, the general theme is the same. The things which fascinate him in the South are Violence and Degradation and Honor, and their strange interweaving under the ominous Southern sun. Or perhaps I can sum all this up to better purpose by saying that what fascinates him in this South is the spectacle of the decay of a pattern which never grew to be ripe, and which always carried in its core the cankers of violence and of degradation for the great body of Southern people--and the slow growing up from the ground of that decay of another pattern, patently akin of the first, patently carrying through the old diseases of violence and degradation for the masses to their ultimate horrid flower, but with the element of Honor dwindling steadily out of the equation--with Honor dying, dying, dying; all the idiot hammers upon the coffin outside the window, and promising in a little while more to be carted off finally to the graveyard.

The Picture Is True

It is a shame. For in its essence, the picture he presents is true. Nobody, indeed, save only Hamilton Basso in his "Courthouse Square" has ever got down the feel of Southern violence as Faulkner has done. Nobody--and I include Caldwell--has so faithfully painted the poor-white. Nobody, save Basso again, has so truly delineated the case of the white man in the South in whom Honor is still operative.