Dorothy Thompson Hits The Nail On The Head On Foreign Affairs

Uncanny Accuracy In Her Predictions 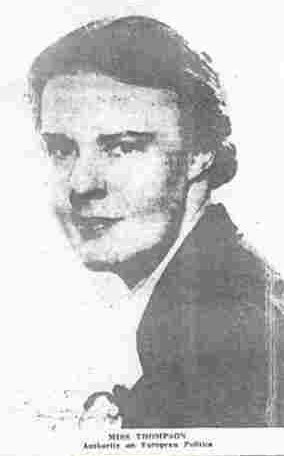 (As originally appearing with article)

Site ed. note: Dorothy Thompson was a foreign correspondent in Berlin from 1924, heading the New York Evening Post's office there from 1924 through 1928. Her 1932 book, I Saw Hitler, based on an interview the previous year, so infuriated the Nazis that the government deported her from Germany in August, 1934 on twenty-four hours notice. (Berlin Diary, William L. Shirer, Knopf, (June 20,) 1941, pp. 14-15) She began writing a regularly syndicated column in early 1936 and became widely known as a radio commentator and lecturer. She died in 1961 at the age of 67, having spent the latter part of her life writing articles for Ladies' Home Journal. Likely prompted by her brief marriage to Sinclair Lewis, she once wrote: "The kind of intelligence a genius has is a different sort of intelligence. The thinking of a genius does not proceed logically. It leaps with great ellipses. It pulls knowledge from God knows where." (For another Cash review of one of Ms. Thompson's books, see "Primer Political Guide" - August 14, 1938.)

A large ditto may be added here to Cash's praise for Ms. Thompson in the accuracy of the foreboding by Cash himself, both from the book-page and the editorial page of The News--right up to and including this very article, published just five days before Hitler's Blitzkrieg plowed into Poland on September 1 and World War II officially began. (For some of Cash's eerily precise presentiments in this regard, read also "A Fanatic Menaces Civilization" - September 1, 1939.)

No doubt, Cash was considerably aided in the process by the reading of Ms. Thompson's perspicacious column regularly; yet, he was no parrot and reached his own conclusions from reading and careful exegesis of, not only other columnists and books on the Nazi regime, but Mein Kampf, itself, inditing meticulous marginal notes as he went. He knew, as Ms. Thompson knew, by early 1936, that Hitler and Mussolini were no harmless clowns merely seeking to balance the weakened economies of their countries left after Versailles, while spouting some feckless dicta to give themselves more gravity in the process. He knew they meant precisely what they said. (For example, see "Time of the Scorn" - May 31, 1936, "Europe's Ku Kluckers"- September 5, 1937, "Fanatic Fuehrer" - March 20, 1938, and "Heebie-Jeebies for the French" - August 21, 1938.)

Cash went a step further--he penetrated the mind of the Nazi--by having read the literature they revered and re-translating it to himself through the Neanderthalic twisting which the Nazi mind had obviously accomplished to posit itself as the grand embodiment of the Superman--and by hearing the egomaniacal power perceived from the Wagnerian measures--and by exhaustively thinking through it from his doorstep. (See "Poet and Superman" - March 27, 1938.) To Cash, Hitler became a personal nemesis--so much so that--as staff of the News later recounted--when the newspaper headlined another putsch, he was seen at the office enraged, throwing the newsprint to the floor and stomping the grainy image of "the little rat-like man" until he collapsed in his chair, exhausted. --Then, he would write.

He had a vast fabric in his background from which to draw strands of comparison--not hard really for the sensitive person who opened his eyes and thought about what he saw in the South of the early 1900's through the 1930's. Cash could observe the effects of second-rate education, virtually non-existent in many parts, low culture, and unending poverty and the depravity which poverty inevitably produces--and the still-fresh reminders that the institution of slavery and the war fought to preserve it was but a mere half century behind. Throughout his young days, Cash could observe the Klan's members not far outside the curtilage of his home preaching their own "Aryan supremacy". He saw the rope and smelled the woods-fires for roasting the latest scapegoat for their condition and he heard the screams--and he looked it dead on and eventually told of what he had seen. (See, for example, "I Propose A Lodge" - March 4, 1928.)

And after his visit to Europe in 1927, he was able quickly to begin in 1933 to transpose the analogy, as "Heel" Hitler inveigled the plurality victory for his National Sozialist Party into his becoming Chancellor of the Reichstag. As Cash was able to penetrate the mind of the dark side of his fellow Southerners from years of contact with the milieu and attempted inculcation by it, he had the basis well-molded to penetrate the mind of "Lord-god" Hitler and his worshipping throng marching in lock-step along Wilhelmstrasse.

The entry into that mind was what set Cash apart from most other journalists and commentators of his day. For he entered the darkly recessed covens possessed of burning scorn shaded by confused myth and mysticism taken literally--the rope handler's domicile. He tried to teach that poetry, music, literature--art in general--was simply meant to heighten and metaphorically inspire literal everyday experience, and endue the observer with a broader view of his own unique experience, not to enable one vapidly to select his or her sentimentally favorite role to play out ignorantly for personal aggrandizement and become thereby the living exponent of a purely fictional character--one never meant to be in reality. And Cash did it for one purpose--to tell truth to the blind and blinded and purblind, for as long as he could.

DOROTHY THOMPSON'S utterances on the domestic scene in the states is often pretty wide of the mark, and generally makes dull reading. But when she turns to Europe, she has an almost uncanny faculty of being right. And because her heart is more manifestly moved by hatred of Hitler and the Nazi ideal than by any other one thing, she writes about it with fine verve and power--often grows genuinely eloquent.

How true that is one can see by merely glancing through the pages of "Let The Record Speak", a compilation of her syndicated columns on foreign affairs from 1936 forward, published Friday by Houghton Mifflin at Boston, containing 408 closely printed pages, and selling at $2.75. (Editors Note--Most of the columns in this volume have been published in The News.)

Long before the rest of American, English, and French correspondents had penetrated to the meaning of Mr. Hitler, while most of them indeed still regarded him as simply a sort of ham Mussolini who would probably be useful in readjusting the worst features of the Versailles Treaty and so bring permanent peace to Europe, she had interviewed the fellow, poured over his works, and grasped the fact that he was in reality the greatest menace to Western civilization to appear since the barbarian invasions which went on from the third to the ninth centuries A.D.

So early as March 1, 1936, she seized on his utterances to the effect that he had absolutely no thought of any overt move to grab the Rhineland, and all he wanted with Czechoslovakia and Austria was that they should give him some trade treaties for the mutual benefit of themselves and Germany, and warned that it was all a lie. Step by step, she went through the Nazi lexicon, to show, what is now abundantly apparent even to such natively wrong-headed people as Neville Chamberlain, that terms like "peace" and "justice" and "equality" and "non-aggression" and "defense" did not at all mean in Hitler's mouth what the world had grown accustomed to accept them as meaning--that his purpose was to build up a great empire, which should lord it over all Europe and perhaps the whole Western world, and that "peace" was only a quiet period in which he built up his war machine.

Nobody paid much attention--called her a "Cassandra," quite forgetting that the reason the old girl was so universally disliked for her dismal croakings was that she always turned out to have been right. But in a few days she had the grim satisfaction of seeing the Rhineland seized. And so it has been ever since. Before the taking of Austria, she ranted and declaimed that it was coming and that the supine "statesmen" of England and France were doing nothing at all to prevent it. And so quickly as that had been done, she turned to the case of Czechoslovakia--said that it was the next victim, and that the "statesmen," so far from seeking to prevent it, were actually and incredibly collaborating in the adventure. She lost her head once or twice, as when she called Anthony Eden the Last Knight Of Europe--a slight exaggeration, to say the least.

Nevertheless, reading her analysis and prophecies now is almost uncanny. For everything she said would come to pass has come to pass. "Peace in our time" is a shabby mockery now. And Hitler, as she foretold, has not only hogged all of Czechoslovakia but is out to hog all Poland--means plainly to go make that a mere starting point for new and greater hoggings. And England and France face a war in which all their futile wrong guesses and lack of decision have served only to weaken themselves and enormously to strengthen the enemy.