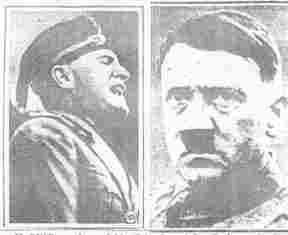 IL DUCE... he read his "Prince; and Der Fuehrer,
who forgot his lessons. See the accompanying
article of W.J. Cash.
(As originally appeared with this article.)

Site ed. note: The thought comes to mind in reading this Cash article that the Allies after World War II did almost precisely to Germany what Cash indicated, by way of citing Machiavelli, was an impractical alternative at Versailles at the conclusion of World War I--occupation, division, and destruction of its traditional culture--and the only sensible method, Cash concludes, of dealing with the defeated enemy other than what should have been reasonably done at Versailles, restoration of lands to Germany, mutual disarmament, insurance of a reasonably strong economy, and only nominal reparations. It is articles such as this one by Cash which have led scholars who have studied him closely to conclude that his writing during this time for The News read uncannily like history written after the fact. It is no wonder that Cash had indicated in 1941 to Alfred Knopf that if he found it impossible to write the novel he planned, he would return from Mexico, switch to a non-fiction work, and seek to become a war correspondent in Europe. It is not hard to guess what the non-fiction work's subject might have been.

Niccolo Machiavelli's "The Prince" is, I suppose, one of the score or so most famous books of the world. But, like too many other famous books, including the Bible, it seems to go mainly unread. Certainly, there is abundant evidence that it has not been read in precisely the quarters where one would suppose it would be most carefully conned.

The so-called statesmen who foregathered at Versailles in 1919 had obviously never read it with any attention, or they would never have perpetrated the criminal, and, what is worse, silly, settlement which they did actually perpetrate. For one of the cardinal principles which Machiavelli lays down for the guidance of his Renaissance despots is that a conquered people ought either to be dealt with in great generosity, ought outright to be caressed, or--utterly and completely smashed beyond any hope of returning. Vindictive and oppressive measures which go only half way, he says, do nothing but infuriate, and nerve the arm of the victim for inexorable retaliation. And all history before him already bore him out, as all history--in particular the history for our own times--is borne them out cents.

Yes, if the gentry who crowded into that Hall of Mirrors had really read and understood this cold, this sternly amoral and immoral little book, they would have known that, considerations of humanity and decency completely aside, the only rational course open to them was the course indicated by the unfortunate Mr. Wilson--that the grand gesture was the only sane one. They would have known that Germany's colonies and her territory had better be left intact (and I include, if not Lorraine, at least Alsace, which whoever has been in it will agree is more German than French); that reparations had better be made nominal at most; that the German babies had better not be left to starve; and that disarmament had better be made equal all around.

They would have known that the only real alternative was to break Germany up completely, hand its parts over to the surrounding nations, and fill it with garrisons of millions of men for a hundred years--the systematic extirpation of the German culture and the German tradition--; a thing which was obviously outside the practical possibilities.

And Madness The Result

And they would have known that the policy of half-vindictiveness and half-humanity, of half-ruthlessness and half-cowardice, of half-cruelty and half-kindness, would inevitably result just as it has resulted: that they would inevitably find themselves confronted, as they are confronted, with a ravening and foaming madness, with power gone insane--with Nazi-ism, requiring remorselessly and inescapably to be put down. They would have known that it meant simply that the war would have to be fought all over again, that millions of men would have to die again, that for every satisfied impulse of spite, their nations would have to pay in incalculable grief.

But it is not only the Allied statesmen who have plainly not read this book. Hitler himself might con it with great gain. For among other things, Machiavelli is particularly intent to caution his despots not to get a reputation for gratuitous brutality and crime--not to alienate the good opinion of the world. And Hitler, of course, has continually flung himself in the face of that admonition, to his great damage and that of his country. All the world holds him for a stinking swine and there is hardly a nation (outside of Italy and Japan) that wants more than a fair excuse to be at his throat. He is a stinking swine, of course; but it was silly of him to let the news get too plainly about. And it is silly of him, too, to neglect that other first principle of Machiavelli, never so completely to give way to rage as to pick a fight with anybody who, whatever woe you may cost him, is perfectly certain in the end to beat hell out of you, to neglect the obvious good sense of Machiavelli that the way to deal with greater powers is to twist and turn, to play for every advantage without ever letting things come to an open trial of strength.

The only man in sight who gives positive evidence of knowing his "Prince" is Mussolini. I despise the fellow, but he plainly has intelligence of a high order, he has as little scruples as that Cesare Borgia whom Machiavelli took for his hero, and he acts in every case on principles that must gladden old Niccolo's artist-heart in whatever corner of hell from which he happens to be looking on.

In point of fact, he is if anything somewhat more murderous and oppressive than Hitler. But almost nobody knows it, outside Italy at least. Certainly, he carries no such name for a swine among Americans as does Hitler. Most of them, indeed, seem to think that he is only a sort of theatrical Republican--or, at worst, a slightly magnified Hugh Johnson, a fellow full of harsh words and the milk of human kindness. He has simply known how to make his corpses and multiply his proscriptions without fanfare and without undue vanity in them.