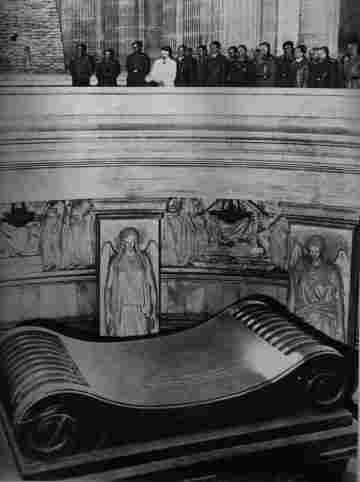 Site ed. note: This haunting article about "the little rat-like man leaning on the balustrade", never once referred to by name, is made more poignant by the fact that the article appeared in the News exactly one year before Cash's death. (Cash may have gotten the idea for the article from the above photograph which appeared in Life the week before he wrote this piece.)

(This article appeared in the Reader section of Southern Prophet by Joseph l. Morrison.)

UNDER THE DOME of the Invalides, in his tomb of green and red marble, brought from Scandinavia, the great man slept as he had slept since they bore him there from the lonely and barren rock in the South Atlantic upon which he died.

And in that shadowed and shining place the rat-like quality of the little man who leaned on the balustrade above and looked down upon him was accentuated and heightened. He had come there almost by stealth, the little rat-like man, in fear that there might be a Frenchman left to remember France, in fear that the sword of Jeanne and Charles Martel--that sword foretold by Merlin--might stir for a moment from the evil spell that held it.

It was a silent and empty place now. There had been no crippled guard to cry "Votre chapeau, m'sieu" to heedless tourists at the door, nor any tourist, but only a gray green creature upon whose face was the mark of the Beast of the Apocalypse, servilely presenting arms.

But the great man slept on. In his time, he had been the master of all Europe, save only England, too. At his command kings had arisen and other kings had fallen. And over all the teeming millions of the great continent he had held the power of destiny.

For him there were things to be said. He had never taken the gorilla for his model. He had not dreamed of destroying the culture of other peoples, of wiping away the values of three thousand years and replacing them with those of a tribe of naked barbarians on the steppes of Mongolia. He had not dreamed of raising up a slave society, to toil humbly for the glory of a myth called The Master Race. He had been brave. He had not warred on women and children. He had not called himself The First Soldier and skulked safely out of the range of the guns, but had been found wherever the battle most raged, in his special dress and on his special mount, so that all men might know him for the man he was. He had not sneaked into the cities he had taken, surrounded by steel and hosts of brutal guards with orders to shoot into the crowds if any man moved, but had gone openly and in the light of day. He had been a lawgiver wise and humane enough for his people to retain his code even after they were free.

But his power had crumbled from his hands and he had died on that bleak rock standing alone in the South Atlantic, his imperial greatness reduced to two or three shabby followers and mocked by the jailers who ringed him about—a prisoner, a fat and maudlin old man mumbling over his past. And now he slept. And his glory was only a name in a book. And the planet which he had trod rolled swiftly on to its inexplicable goal in the constellation Hercules and the time when Paris would not be there, when the red and green marble and the bones of his body would not be there, and his name would be as lost as the name of the first man to dwell in the caves southward of his resting place, on the Lot.1 And in the world there was nothing certain save that, after his brief span, he slept and would sleep—and that the empires fragile man raises are fragile things.

But the little rat-like man leaning on the balustrade with his cap on his head was proudly smiling as he roused himself, strutted about the great room to stare at the banners hanging from the walls—the banners which the sleeping man had borne from towns whose names he had made like trumpets and the rolling of drums: Ulm, Marengo, Austerlitz, and Leipzig. Was still proudly smiling as he came out and was saluted by the gray green creature and hurried into a swift and armored automobile and fled away lest the sleeping sword of Sainte Catherine de Fierbois, which had once been raised under the citadel of Chinon, should stir again from the fateful spell upon it.

1 The Lot is a river, tributary of the Garonne, which flows through the mountainous Auvergne region.